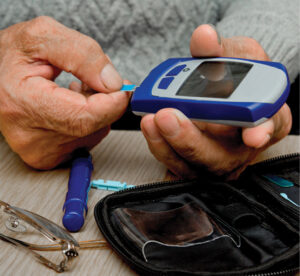 Did you know that 84 million people in the United States are prediabetic? And over 30 million people have the disease. Specialists are saying that it’s an epidemic. There are two primary forms of the disease, known as type I and II; while both are equally dangerous, type II is the most common. Glucose is the byproduct of the breakdown of the sugar and carbohydrates that we eat. Glucose is an essential nutrient that powers the cells in our bodies. However, a hormone in the blood called insulin is also critical for our cellular regeneration, as insulin is needed to absorb the glucose and use it for energy. With diabetes, the body doesn’t make enough insulin, or the body can’t use the produced insulin, and it builds up in the blood. This is known as insulin resistance, a dangerous condition that can lead to stroke and cardiovascular disease.

Diabetes and peripheral neuropathy are interconnected. Neuropathy is nerve damage, which is caused by insulin resistance and the inflammatory response that coincides with the disorder. Peripheral neuropathy causes the patient not to feel the full sensations of pain when they get a cut or small bruise, especially on their feet. Individuals with diabetes are at a higher risk of developing non-healing ulcers on their feet and ankles because glucose deters the healing process. It’s often difficult for a cut or wound to heal.

Dr. Matthew Sanders of the Vascular and Vein Center of Gulfcoast Surgeons explained, “People with diabetes are more prone to foot ulcers due to diseases of the nerves which make them less likely to feel pressure points, decreased ability to heal and fight infections, and greater incidence of peripheral vascular disease.”

“25% of people with diabetes will develop an ulcer in their lifetime. Of these ulcers, 50% will become infected. Of those that become infected, 20% will require an amputation. It is very important for people with diabetes to have their feet evaluated by a podiatrist, wear proper footwear, and seek immediate attention for any wound on their feet.” Dr. Sanders continued. “Ideally, every diabetic patient with an ulcer should be evaluated by a vascular surgeon for arterial blockages, which are also more common in diabetics.”

If foot ulcers are left untreated in diabetic patients, they can lead to progressive infection, and the patient can be at risk for amputation of their toes, foot, or leg. If treated properly and early enough, a vascular surgeon can save limbs with various techniques and procedures. Many times wound care, and vascular intervention is combined for optimal results.

If you have diabetes, it’s critical to keep your A1C level under 5.7 percent; your fasting blood glucose should be less than 100 mg/dL. Staying on top of your numbers and your diet and lifestyle choices are critical for your overall health.

Many times, patients will have minimal to no signs of diabetes. That’s why it’s often referred to as a silent ‘silent disease.’ You should regularly have blood work taken to make sure all of your numbers are in check. If you have diabetes, you should see a vascular surgeon even if you are not having symptoms, as symptoms and warning signs can often go unnoticed. Diabetes and vascular disorders are interrelated—Don’t ignore or put off your health. There are diagnostic tests that can be performed in the office setting, and if you need a stent or other procedures to open or repair blocked arteries, those steps will be determined by your vascular surgeon.

If you are at risk for diabetic foot ulcers, make an appointment with a vascular surgeon specializing in arterial and venous disease.

Vascular & Vein Center at Gulfcoast Surgeons
The Vascular and Vein Center at Gulfcoast Surgeons is one of the first and most respected vein clinics in Southwest Florida. Their surgeons, Dr. Abraham Sadighi, Dr. Michael Novotney, Dr. Johan Escribano, and Dr. Matthew Sanders have performed thousands of vascular and vein surgeries over the past 28 years.

They focus on diseases of the vascular system that can range from harmless but unattractive spider veins to dangerous conditions such as peripheral artery disease. Their caring and dedicated team will help you identify problems and offer the best treatment options for you.

The Vascular and Vein Center at Gulfcoast Surgeons offer a fully equipped vascular lab and state-of-the-
art Angio suite to provide a higher level of service and care for their patients. You’ll find comfort in knowing that they have a long-standing reputation for positive surgical outcomes that allow you to get back to healthy living.

Call the Vascular & Vein Center at Gulfcoast Surgeons today at (239) 344-7061 to make an appointment with a vascular surgeon who specializes in arteries and veins. 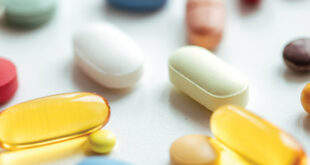 An Eye-Friendly Look at Nutrition