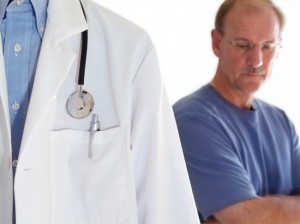 Less Aggressive Therapy with Screening Detected Cancers
In fact, the USPSTF recommended against screening mammography a few years ago for women aged 40-49. This recommendation has subsequently been proven wrong. In Radiology, 2012;262:797-806, Judith Malmgren from the University of Washington in Seattle published that women age 40-49 with screening mammographically detected breast cancer have a lower cancer recurrence rate and require less aggressive therapy than women whose cancer was not detected with screening mammography. So the USPSTF has a questionable track record. In men with PSA detected prostate cancer, we can frequently treat with less aggressive therapy which results in fewer side effects. If not diagnosed until cancer is more advanced, treatments are more difficult, side effects worse and the cure rate is lower.

The side effects of prostate cancer treatment are rapidly falling. Incontinence after radiation therapy (IG-IMRT or Brachytherapy) is rare. Most recent studies using modern IG-IMRT and Brachytherapy techniques show an extremely low rate of rectal side effects too.

To learn more or to schedule an appointment, please contact Lakewood Ranch Oncology Center a division of 21st Century Oncology at 941-907-9053 or visit us online at www.LWROncology.com.