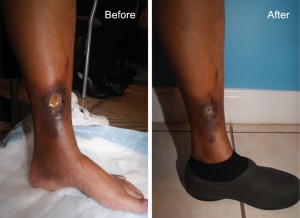 If you have an ulcer on your leg which has not healed for more than 3 months despite a variety of wound care regimens, it might be time to consider a thorough venous evaluation. On a number of recent occasions I have encountered patients of varying ages who presented with the chief complaint of non-healing wounds and this reminded me of the importance of educating the public about the relationship between non healing wounds and venous insufficiency. A recent case was that of a 50 year old woman who had suffered for more than 6 moths with a large wound on the left leg. She had been seen by a dermatologist and a wound center out of town where she had undergone debridement (scraping of the wound with a scalpel) weekly over the course of 2-3 months. She did not have improvement of her pain or any significant progress in the healing of the wound. She had noted a long history of darkened and thickened skin involving the left calf although had never thought of having it evaluated. She did not have “varicose veins” and thus did not suspect her problem to be venous in origin. Ultrasound evaluation was performed and confirmed severe insufficiency (leakiness) in the left great saphenous vein directly feeding the ulcerated area. She underwent endovenous ablation (sealing) of the leaky vein (great saphenous vein) within one week of her original visit and she noted relief of the pain and pressure immediately after the procedure. She healed the ulcer completely in 8 weeks without further debridement and without skin grafting.
(see before and after photos)

Venous ulcers usually result from a trauma of some sort (bug bite, blister, skin biopsy), and once the skin barrier is violated the pressure of the underlying fluid accumulated as a result of leaky veins forces the defect in the skin to progressively open. Over the course of a few weeks ulcers may enlarge as the accumulation of fluid in the tissues causes more tension in the over-stretched skin. The swelling caused by venous insufficiency slows the healing of ulcers by impairing oxygen and nutrient transport to the ulcer bed. The two phases of wound healing are granulation and contraction and both are adversely affected by venous insufficiency. Granulation is the process where necrotic tissue (white or yellow in color) is replaced by healthy tissue (pink or red in color) and usually has to take place before the wound can start the second phase of wound healing, contraction (shrinking or closing in). When venous insufficiency is untreated, simple ulcers may take extended periods of time to heal and the longer wounds are left open, the greater the risk of blood-borne infections occurring. Unfortunately, patients and physicians may become complacent and “learn to live” with their open venous wounds rather than taking the initiative to fully investigate all potential underlying causes, including the most common cause of lower extremity ulcers, venous insufficiency. In 2013, more than 13 years since the introduction of endovenous ablation as the preferred treatment of venous insufficiency, there should be no lower extremity wound left uninvestigated for venous insufficiency. Since venous insufficiency affects 20% (40 Million) of the adult population in America, and endovenous ablation is still a relatively “new” procedure, there are still many patients out there with untreated and undiagnosed venous insufficiency today who are suffering needlessly.

The role of the modern, educated and dedicated Vein Specialist is to educate both patients and physicians of all specialties regarding routine as well as the more obscure presentations of venous insufficiency. Equally as important as the training, skill and dedication of the Vein Specialist are the same three qualities of the Vascular Technologist. The most critical goal in the evaluation of patients with suspected Venous Insufficiency is the identification of the specific insufficient veins as well as the stratification of severity of the insufficiency. Many patients have more than one of the potential 5 superficial leg veins identified as insufficient and 5-10% of our patients have combined superficial and deep vein insufficiency. If one suspects they may have venous insufficiency, it is our recommendation to seek a comprehensive evaluation by a qualified Vein Specialist with a background in Vascular Surgery.