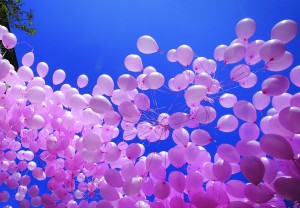 In case you’ve been off the planet for the past 20 years, October is the month of the pink explosion:  pink fire engines, pink tractors, pink scissors, pink hair, pink clothes … pink ribbons everywhere. It is Breast Cancer Awareness Month.

Kudos to the colossal efforts of breast cancer survivors everywhere for raising awareness of this disease through the use of the iconic pink ribbon – and to organizations like the Susan G. Komen Foundation who have raised countless millions of dollars to combat the disease.  Today women around the world are learning the value of regular mammograms to detect early breast cancer – and those who lack funds or insurance can find places to get this life saving exam.

While we almost always think of breast cancer as a woman’s disease, there are men who develop it, too.  About 1% of all cases occur in men … that is not much, but it accounts for about 2,000 men a year, and a rather high mortality rate.  Some 450 men die each year as a result of breast cancer.

In men’s breasts, cancer can begin in the ducts and spread to surrounding tissue, similar to the pathway in women’s breasts.  Rarely, men can develop an inflammatory breast cancer (called Paget’s Disease) that begins in a duct beneath the nipple, then moves to the surface.

Another condition of the breast that men should be aware of is “gynecomastia,” a more common disorder in males.  Gynecomastia is not a form of cancer, but does cause a growth under the nipple that can be felt and sometimes seen.  Some men who are under hormone treatment for prostate cancer will experience the growth of gynecomastic tissue, and often teenage boys will note this type of breast tissue growth while they are going through the hormonal changes of puberty.

Treatment for male breast cancer is generally the same as for female breast cancer, and includes surgical removal of the breast (mastectomy for full breast, or lumpectomy for just the tissue identified as cancerous) followed by radiation therapy, perhaps additional chemotherapy and/or hormone therapy.

If the cancer is believed to have spread outside the breast to the lymph nodes, adjuvant therapy including hormone therapy and chemotherapy will be necessary to stop the spread.  For men whose breast cancer has spread to other parts of the body, the challenge is greater – and treatment will include several different therapies.

Advice to men is the same as to women – take a minute to check your breasts once a month.  It can be done while in the shower – just feel them for any bumps or lumps, then look the mirror for any visible changes.  If something looks funny don’t delay.  Call you doctor for an appointment.

Like all cancers – early detection provides your best chance for survival and cure!  When you see those pink ribbons this month, remember they include YOU.

Symptoms of breast cancer in men are similar to those in women:
• Skin changes, such as a swelling, redness or visible differences in one or both breasts
• An increase in size or change in shape
• Changes in the appearance of one or both nipples
• Discharge from the nipple
• General pain in or on any part of the breast
• Lumps felt on or inside the breast