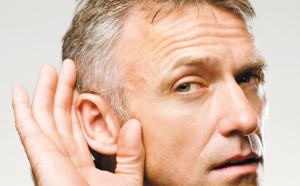 As an Audiologist who diagnoses hearing loss and provides treatment through the fitting of hearing aids, I am always dismayed at how long some people are willing to live with a diminished ability to hear and communicate.  It amazes me that, on average, it takes seven years for someone to pick up the phone to seek help for their communication needs. Many others, even after their hearing loss has been diagnosed, choose to wait for treatment. I can only imagine the frustration that friends and family must experience as a result.

But now, there is another reason that gives some urgency to treating hearing loss rather than ignoring it. In a recent study by Johns Hopkins and the National Institute on Aging, it has been shown that the aging brain shrinks more quickly in older adults who have hearing loss and it is this brain atrophy that increases our risk of being affected by cognitive dysfunctions such as memory loss and dementia.

“If you want to address hearing loss well,” Lin says, “you want to do it sooner rather than later. If hearing loss is potentially contributing to these differences we’re seeing on MRI, you want to treat it before these brain structural changes take place.”

In addition to having your hearing loss treated quickly, I have always advocated that brain health and subsequently your ability to hear, listen and understand, can be improved through exercise. My belief is supported by the ACTIVE study, the largest study on cognitive training ever performed, which proves that healthy older adults can make significant cognitive improvements with appropriate cognitive training and practice.

So what’s a good way to exercise your brain? I recommend the Posit Science computerized cognitive brain training exercises available at www.positscience.com. Their BrainHQ program drives improvements in intelligence, memory, brain speed, people skills etc. that are significantly better than other types of cognitive exercise…and it’s fun too! Check out their web site to play a free game and to become a subscriber.

Getting older doesn’t have to mean decreased mental abilities. I, for one, plan to embrace the tools that are available that can maximize my cognitive abilities as I age.  I hope you do too! So if you’ve been putting off making an appointment to have your hearing checked, give me a call today. I can’t wait to hear from you.

Dr. Noël Crosby, Au.D., owner and practicing audiologist at Advanced Hearing Solutions in Englewood, FL is an experienced  professional whose career has been devoted to helping people of all ages hear and understand more clearly.

With over 23 years of experience, Dr. Crosby’s career path is marked by the pursuit of advanced education.  After completing her undergraduate requirements, she received her Bachelor and Master of Science degrees from Florida State University and her Doctorate in Audiology from the University of Florida.

Her credibility as an authority grew during her tenure as the Director of Audiology at the Silverstein Institute in Sarasota, FL from 1991-1998. Today, in addition to managing a successful audiology practice, Dr. Crosby just completed her second term as president of The Florida Academy of Audiology.

Share
Previous What is your body telling you? A Functional Guide to Sleep.
Next Micronutrient & Telomere Testing The difference between feeling “good” and feeling “GREAT”!