By Shardul A. Nanavati, M.D., Advanced Gastroenterology of Naples – 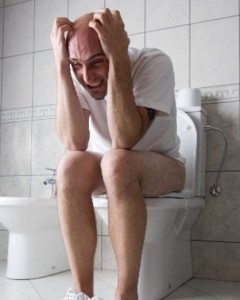 Constipation is one of those topics we generally don’t like to talk about. If you’ve suffered from this problem, though, you know it can be both painful and frustrating.

Almost everyone gets constipated at some time during his or her life. Women and the elderly are more commonly affected. Although it is not usually serious, constipation can be a concern.

Constipation is the infrequent and difficult passage of stool. The frequency of bowel movements among healthy people varies greatly, ranging from three movements a day to three a week. As a rule, if more than three days pass without a bowel movement, the intestinal contents may harden, and a person may have difficulty or even pain during elimination. Stool may harden and be painful to pass even after shorter intervals between bowel movements.

Common Misconceptions About Constipation
Many false beliefs exist concerning proper bowel habits. One of these is that a bowel movement every day is necessary. Another common fallacy is that wastes stored in the body are absorbed and are dangerous to health or shorten the life span. These misconceptions have led to a marked overuse and abuse of laxatives. Every year, Americans spend $725 million on laxatives. Many are not needed and some are harmful.

What Causes of Constipation?
Constipation is a symptom, not a disease. Like a fever, constipation can be caused by many different conditions. Most people have experienced an occasional brief bout of constipation that has corrected itself with diet and time. The following is a list of some of the most common causes of constipation:

Poor Diet. A main cause of constipation may be a diet high in animal fats (meats, dairy products, eggs) and refined sugar (rich desserts and other sweets), but low in fiber (vegetables, fruits, whole grains). Some studies have suggested that high-fiber diets result in larger stools, more frequent bowel movements, and therefore less constipation.

Imaginary Constipation. This is very common and results from misconceptions about what is normal and what is not. If recognized early enough, this type of constipation can be cured by informing the sufferer that the frequency of his or her bowel movements is normal.

Irritable Bowel Syndrome (IBS). Also known as spastic colon, IBS is one of the most common causes of constipation in the United States. Some people develop spasms of the colon that delay the speed with which the contents of the intestine move through the digestive tract, leading to constipation.

Poor Bowel Habits. A person can initiate a cycle of constipation by ignoring the urge to have a bowel movement. Some people do this to avoid using public toilets, others because they are too busy. After a period of time a person may stop feeling the urge. This leads to progressive constipation.

Laxative Abuse. People who habitually take laxatives become dependent upon them and may require increasing dosages until, finally, the intestine becomes insensitive and fails to work properly.

Pregnancy. Pregnancy is another common cause of constipation. The reason may be partly mechanical in that the pressure of the heavy womb compresses the intestine, and may be partly due to hormonal changes during pregnancy.

Specific Diseases. Many diseases that affect the body tissues, such as scleroderma or lupus, and certain neurological or muscular diseases, such as multiple sclerosis, Parkinson’s disease and stroke can be responsible for constipation.

Loss of Body Salts. The loss of body salts through the kidneys or through vomiting or diarrhea is another cause of constipation.

Mechanical Compression. Scarring, inflammation around diverticula, tumors and cancer can produce mechanical compression of the intestine and result in constipation.

If you experience constipation, try the following:
• Drink two to four extra glasses of water a day (unless fluid restricted).
• Try warm liquids, especially in the morning.
• Add fruits and vegetables to your diet.
• Eat prunes and/or bran cereal.
• If needed, use a very mild stool softener or laxative (such as Peri-Colace or Milk Magnesia). Do not use laxatives for more than two weeks without calling your doctor, as laxative overuse can aggravate your symptoms.

Call your doctor if constipation is a new problem for you, there is blood in your stool, you unexpectedly lose weight, have severe pain with bowel movements, constipation lasts more than two weeks.

For more information about or to speak with a doctor about constipation and other gastroenterology conditions, call Advanced Gastroenterology of Naples at 239-593-9599.