Advanced Surface Treatment has taken laser vision correction to a new level. This latest development is an excellent new alternative that “merits consideration by just about anyone requiring vision correction. Advanced Surface Treatment is an especially good option for people who have been previously advised that their eyes are not suitable for LASIK, or whose active lifestyles may have precluded them from having that procedure.

The Evolution of Laser Vision Correction Laser Vision Correction is now in its second decade of providing excellent vision to millions of people every year, while reducing or eliminating their dependence on glasses or contact lenses. The FDA initially approved it in 1995 to treat nearsightedness by removing small amounts of corneal tissue from the surface of the eye with a procedure called Photo-Refractive Keratectomy, or PRK. However, laser vision correction got off to a slow start with PRK because it was not very popular with patients, primarily due to complaints of postoperative discomfort and a relatively slow return of functional vision.

In the quest to improve patient acceptance of this life-altering, vision correction procedure, surgeons adopted a new procedure known as LASIK. With LASIK, an instrument called a microkeratome, or a femtosecond laser, creates a relatively thick, corneal flap that is folded back. The surgeon then uses an excimer laser to remove the proper amount of tissue from the stroma, the middle layer of the cornea, and returns the flap to its original position.

LASIK has proven to be very popular with doctors and patients. For most patients, functional vision returns very quickly, and they experience little, if any, post-operative discomfort But, LASIK is not an ideal procedure for everyone To be a good candidate for LASIK, the cornea has to be of sufficient thickness to al low for the creation of the flap and the removal of the proper amount of tissue. If patients’ corneas are too thin, if they have itchy and dry eyes, or if they’re simply uncomfortable with the thought of having a corneal flap created, they would be better candidates for surface treatment.

LA surgeon performing an Advanced Surface Treatment procedure uses a precise instrument called an epikeratome to gently separate the epithelium, outer layer of the cornea, and to leave a very smooth surface for laser treatment. The cornea is then reshaped with an excimer laser. During the healing process, the epithelium is replaced by the regeneration of new epithetial cells over the treated area. 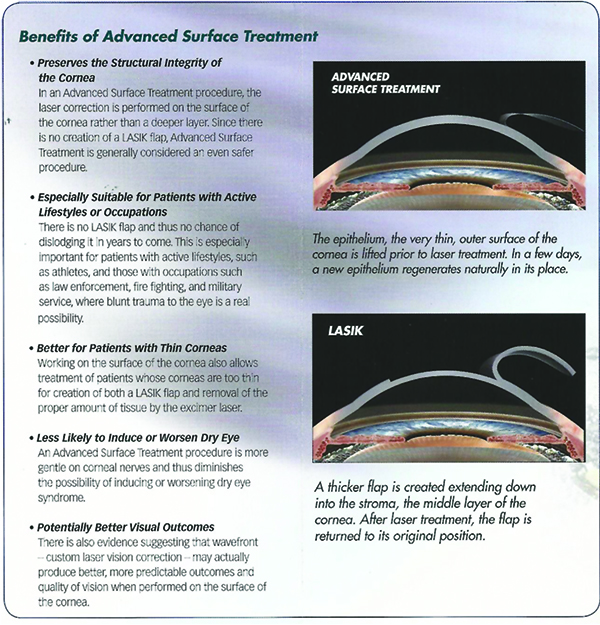