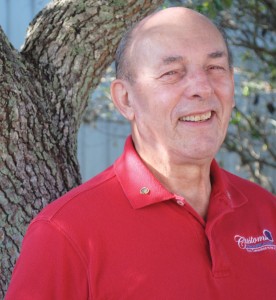 It is not rare to see an 82-year-old in a general surgeon’s office for a hernia. What is rare is when you read “Reason for being here”, on the new patient forms and see “lifting 75 pound spool wire” written. That is what Dr. Bunch’s office saw when they read Bob MacDonald’s paperwork and then they remembered Bob from 10 years ago. See Bob is one of those Florida residents who moved down believing that retirement was his ultimate goal only to find out that he hated retirement… “I can’t just sit on my rump, I need to be doing something, I need to stay active.” Says Bob

Bob was a banker by trade in the Syracuse area of New York, he started as a teller and when opportunity called he was available. Bob worked his way up through the ranks and retired as an executive of a local bank back in 1990. He and his wife liked Florida and had a son living in the Sarasota area where they visited frequently. So, as often happens, they packed the house and headed south. “I was retired for all of three days before Robert, Bob’s son, called” Robert recently bought out a partner in a growing communications company, Custom Communications, they install network and phone systems for businesses in Sarasota and being a growing company they could use all the help he could find. It just so happened that free help had just relocated to town…

Bob was looking for something to do and he couldn’t think of anything better than helping his son with a growing business. Over the years Bob continued to be semiretired helping Robert when he needed it and watching his family grow around him. Bob has two sons, 10 grandchildren, 3 great-grandchildren and one on the way. It wasn’t long before Bob found himself at Dr. Bunch’s office with his first hernia. ”Dr. Bunch’s office is the best of the best. The staff are great and I couldn’t have been happier with the results.” says Bob about his first procedure. Did it slow him down? Just ask to read his paperwork at Dr. Bunch’s office ten years later and you will get your answer. This time Bob asked if the procedure could be done in Dr. Bunch’s surgery center instead of the hospital and Dr. Bunch was happy to oblige. “I went in at 6:30am and was out by 11:00am. I had very little discomfort and was good to go the next day. I was limited on how much I could lift and after my follow up visits I have had no issues what so ever.” “The office staff are just as nice and friendly as they were ten years ago, I can’t say enough great things about them.”

Bob is still helping at the company when Robert calls. He is in better shape than most people 30 years younger, a pleasant conversationalist and a great storyteller. If you need a phone system or some networking in your office call Custom Communications 941 747 6108, you can ask if Bob Sr. will be available to come out, but don’t be surprised if he brings a helper with him. “No more lifting spools of wire”, Dr. Bunch’s orders.