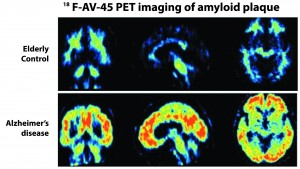 Diagnosis of Alzheimer’s is made through tests designed to measure cognitive functions. Until recently, other than observation of a patient’s behavior, there is no medical method or test available to prove the existence of Alzheimer’s disease.

What if we could diagnose Alzheimer’s before symptoms started? The hope is, future treatments could then target the disease in its earliest stages, before irreversible brain damage or mental decline has occurred. Research on new strategies for earlier diagnosis is among the most active areas in Alzheimer’s science, and funding from the Alzheimer’s Association has spurred significant advances and steady progress.

Making an early diagnosis of a disease which has unknown causes and no treatment is not necessarily cause for celebration.  A patient may show signs of dementia due to a brain tumor, stroke, or other neurovascular disease. Using Amyvid to expose the presence of plaque deposits in the brain can potentially rule out these other diseases and put the blame on Alzheimer’s.

In 2012, the U.S. Food and Drug Administration today approved Amyvid (Florbetapir F 18 Injection) a drug for Positron Emission Tomography (PET) imaging of the brain in adults who are being evaluated for Alzheimer’s Disease (AD) and other causes of cognitive decline. Cognitive decline refers to a condition where the ability to think and form clear, rational thoughts and decisions has decreased. It can cause an individual to lose touch with reality, oneself, other people, and external events and surroundings.

Many Americans undergo evaluations to try to determine the cause for a decline in cognitive functioning.  Until recently, the brain content of β-amyloid neuritic plaques could only be determined with a brain biopsy or examination of the brain at autopsy.  This imaging agent is one tool to help physicians in the assessment of their patients by serving as an adjunct to other diagnostic evaluations.

Following intravenous injection, Amyvid (a radioactive drug) binds to brain β-amyloid.  A radioactive signal is detected with a PET scanner to produce images of the plaque in the brain. A positive Amyvid scan indicates moderate to frequent plaques.  However, a positive Amyvid scan does not establish a diagnosis of AD because, although patients with AD always have an increased brain content of plaque, the test also may be positive in patients with other types of neurologic conditions, as well as in older people with normal cognition.

Amyvid is not a test for predicting the development of AD-associated dementia and is not for monitoring patient responses to AD therapy.  Amyvid does not replace other diagnostic tests used in the evaluation of cognitive impairment. This is a new type of nuclear medicine test and images should be interpreted only by healthcare professionals who successfully complete a special training program developed by the manufacturer.

For more information about early detection of Alzheimer’s Disease, or other cognitive disorders, contact Advanced Imaging to learn more about the Amyvid scan, please call 941-235-4646 or visit our website at advimaging.com.

THE NEXT STEP IN MANAGING URINARY INCONTINENCE IN WOMEN