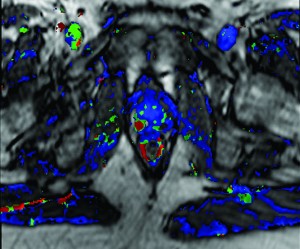 Historically, prostate cancer has proven to be the most common non-skin cancer, and carries the second highest mortality rate of cancer-related deaths in men within the United States. Approximately 1 in 6 men will be diagnosed with prostate cancer during their lifetime, with an average of 233,000 new diagnoses a year, according to the National Cancer Institute. This is almost as much as the 247,000 new cases of breast cancer predicted to occur in 2016 by American Cancer Society, and yet it’s not a topic found commonly in the media.

Enter 3T High Resolution Prostate MRI. Through the use of fast imaging techniques and computer aided detection software, Prostate MRI’s provide a high sensitivity for aggressive prostate cancers, averaging 90% accuracy and greater. This non-
invasive method was deemed the most specific tool available for imaging prostate cancer by European Urology in 2011. In fact, it’s identified cancer in up to 41% of men who had a previous negative result through a TRUS biopsy, and 87% of the cancers detected through this method have been found to be clinically significant and in need of treatment A 2014 study published in the European Association of Urology made these differences even more clear. The study showed that 223 men without any history of previous biopsies underwent both a TRUS biopsy as well as a MRI guided biopsy of the prostate. The TRUS biopsy returned with only a 56% detection rate for prostate cancer, compared to the MRI guided biopsy results of 70% detection rate. In addition, 37% of the cancers detected by TRUS were found to be clinically insignificant, while only 6% of the MRI detected prostate cancers were found to be clinically insignificant. This could potentially help prevent unnecessary biopsies of the prostate.

3T High Resolution Prostate MRI’s are currently covered by most insurance plans, and can be scheduled at a Radiology Regional Center either in Cape Coral or Fort Myers. Consult with your physician to see if you’re a candidate for the exam. If you’re going to be scanned, shouldn’t you do it where it will give you the best chance for a diagnosis?

Share
Previous My knees and hips hurt… In 3-6 weeks would you like to walk, swim, and play golf …pain-free?
Next Prevent Falls with Home Safety Strategies