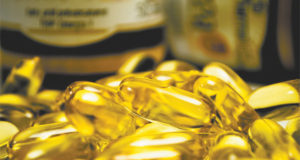 According to the National Center for Health Statistics, fish oil is now the most commonly used non-vitamin, non-mineral supplement in the USA. But just as omega-3 fish oil has grown in popularity, so has the misinformation and confusion surrounding this powerful nutrient.

Let’s clear up some common myths about omega-3s, focusing particularly on source and benefits.

From salmon to flaxseed, chia seeds, and walnuts, popular health websites and magazines often claim that there are plenty of ways to get these essential fatty acids. But not all of these omega-3 sources provide the same value.

When we talk about omega-3, we’re talking about a family of fatty acids. Of the foods we commonly eat, only fatty fish (and breast milk for babies) contain the full range of the omega-3 family, including the better known EPA and DHA molecules.

Plant sources, in contrast, contain only one type of omega-3: ALA.

Relying exclusively on ALA-based foods for your omega-3s has several problems. Firstly, almost every omega-3 clinical study to date has focused on EPA and DHA from fish and fish oil. And science also shows that ALA does not have the same benefits as EPA and DHA.

Secondly, for a long time, it was believed that people had the ability to synthesize EPA and DHA from ALA-
based foods. More recent research, however, shows that the conversion rate of ALA into EPA and DHA is so low that it’s inconsequential for most people. This is why eating fatty fish or taking a quality fish oil supplement is far superior in delivering the benefits of omega-3s.

Myth #2: Eating Fish Is the Best Way to Get Your Omega-3s

Eating fatty fish is a wonderful way to increase your omega-3 intake. But today, there is a clear discrepancy between this often-heard recommendation and reality: Studies show that 95% of Americans do not get enough omega-3s from their diets.

There are many factors that contribute to this diet deficiency. Many people say they don’t eat fish because they follow a vegetarian or vegan diet, are unsure of how to prepare it, feel like they can’t afford it, or don’t care for the taste or texture.

But even for the people who eat seafood regularly, it can be challenging to get enough omega-3s from diet alone. Some of the most popular seafood options — like shrimp or tilapia — contain almost no omega-3 fatty acids. In addition, other factors — like whether the fish was farm raised and the cooking method – can significantly impact the omega-3 content as well.

Let’s take the example of eating salmon for dinner. With wild caught salmon, the amount of omega-3s can vary somewhat depending on the season and the type of salmon. However, you would still expect a wild-caught salmon to contain a substantial amount of omega-3s. If the salmon is farm raised, however, its nutritional value can vary tremendously depending on the provider. For instance, the BBC reported in 2016 that over a five-year period, the omega-3 levels in farmed salmon shrank by 50% because the industry was cutting down on costs.

In other words, consumers eating farmed fish now have to eat twice as much fish to get the same amount of omega-3s provided just a few years before!

This is all to say, if you are like most Americans, you probably need to consider omega-3 supplements. If you think you might already be consuming a sufficient amount of these fatty acids, you can take an omega-3 index test to find out if you are right.

Myth #3: The Benefits of Fish Oil Are Too Good to Be True

If a nutrient gets credited with helping improve chronic pain and dry eyes, depression, cognitive function and more, it’s got to be too good to be true, right?

The reason omega-3s are researched for a broad range of health issues is because these nutrients are critical for the proper functioning of every cell in our body. They enhance the fluidity and permeability of the cell membrane; they influence cell signaling and gene expression; they help control the body’s inflammation response; and more research is coming out showing how these fatty acids support the microbiome and endocannabinoid system.

It’s estimated that omega-3s are involved in more than 10% of all cellular metabolic actions. No wonder high quality fish oil can produce such varied, widespread effects in the body.

This article was abbreviated from a longer version published on omega3innovations.com. For the full text and references, visit:

Bo Martinsen, MD
Dr. Martinsen is an omega-3 specialist, innovator, and advocate for natural foods. As co-founder and CEO of Omega3 Innovations, he has created several patented medical food products that combine dose-effective ingredients of omega-3 fish oil with soluble fibers and other nutrients. Before Omega3 Innovations, Dr. Martinsen practiced medicine in Norway for 20 years, focusing on occupational and preventive medicine.

A Closer Look at the Advantages of a Deferred Fixed Annuity